Dan Smullyan, brilliant songwriter, the heart and soul of Rollo, and our great friend, died on October 19, 2016. His music will live on.

Rollo members Jonathan and Kurt Ochshorn continue to work and make music. Jon has new music on his web site, with links to mp3s and videos; Kurt is developing a new recording studio and has titles worked out for at least two new songs. His legendary Silent Night video has become a huge hit on YouTube. Dan continued to write songs, including this recording of a Jewish blues singer from Depression-era Mississippi. 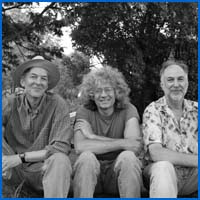 © 2007-2015 Rollo (Ochshorn, Smullyan, Ochshorn). All rights reserved.
Republishing material on this web site, whether in print or on another web site, in whole or in part, is not permitted without advance permission of Rollo.